As much as I love cats, I also realize that they are insane.  Much like me.  (I’m already turning into a crazy cat lady who wants to talk about her cat ALL the time.  It’s like G (Bitey) is my child.  Seriously.)  So cats in general like to do things that are the complete opposite of what you want them to do.  If they know it annoys you or will otherwise get your attention, BAM they are on it.  The minute they hear you say “NO!”  they know it’s their cue to keep doing whatever it is they are doing.  G has mastered every way to annoy me into getting EXACTLY what he wants.  He’s actually a very effective con-artist (cat-artist?  Cat Con-Artist?).  Manipulator.  Tricksy…little….mmmmhmm.

Ways in which Bitey tries to annoy me:

1.  Slowly and carefully pushing my phone off of every single surface.  It’s like he knows I like my phone.  He’s realized that.  So he puts his little paw next to my phone and push push push and SLAM that phone is on the floor.  HAHA!!  Bitey wins!

2.  If Bitey sees my phone on the bed or somewhere like that, he will attack it.  The screen protector has all kinds of marks on it because of his little claws and teeth.

3.  He also pushes the remote off any surface and then attacks it, gripping it with his arms (front paws?) and kicking it with his rabbit feet.  A REMOTE control?  Why????  It’s like he knows we use it or something.  How does he know!!??

4.  If you are drinking a glass of water and you set it down, pretty much anywhere, he will mosey on up to it and stick his head right down into the glass and therefore defile your water with his kitten fur and tongue.  Doesn’t matter how far down the water is, he will attempt to reach it with his head and if that fails to work, he will back out and dip his paw in.  His LITRE box paw.  Ewww! We’ll get to that later.

5.  If you want to brush your teeth, forget it.  He will jump on the sink and get his little cat prints everywhere and then will stick his head under the faucet for a drink.  Then he will bat and play and attack the water, sticking his paws under the flow to send it everywhere.  If you dare to put your tooth brush under the water, he will no doubt try to bite or play with it.

HAHAHA!! Seriously, that is all.

6.  When I load the dishwasher, Bitey thinks it would be fun to jump inside the dishwasher once I’ve pulled out the bottom tray.  He sits inside and tries to play with the little whirlygig thingys inside and the REFUSES to get out when I want to close the dishwasher.  This is especially annoying when the dishes are CLEAN!!  WTF!!!

7.  The same idea works for the laundry.  We have a front load washer and when I load clothes, Bitey jumps inside and stays there while I load clothes on top of him.  This is particularly hilarious when I’m done and he pokes his head out from between all the clothes and his ears are pushed back and it’s just his little alien head that is showing.

8. He’s a master needle-threader…as in his skills in slipping through doors that are closing and getting inside before the door is completely shut (He’s not good at sewing).  He particularly loves rooms that he is typically not allowed into and will make hell.  For example, our guest bedroom has a huge aloe plant on top of a dresser.  If he is able to thread the needle and get inside he will jump onto the dresser and climb into and bite the aloe plant.  This is particularly annoying when you want to leave or go to bed and can’t catch him, because he will run and hide. 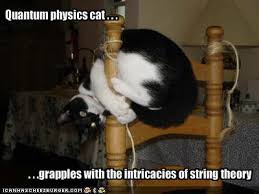 9.  Clean clothes, towels or sheets are like a magnet to him.  In the bathroom I have clean wash cloths in a basket this is his favorite place to sleep.  Even after I covered both towel baskets with something to keep him out, he still managed to knock it off and find his way inside.  Getting his black fur all over my CLEAN towels.  Not acceptable.  Nothing is sacred.

10.  Plants are always in danger.  (How they shudder and silently scream at his approach, we may never know!)  We have a “money” tree and he broke a branch off it by climbing inside the plant.  He also tries to play with my jade plant that I’ve had for YEARS longer than him and he knows that I don’t like it.  He does it to taunt me.  He makes sure I am paying attention and the purposefully puts his paw up to bat at the leaves.  He’s destroyed a golden pathos  I have in our bathroom.  There are no leaves, just little blackened gooey stems.

11.  Toilet paper is for playing and not for any other purpose.  If you leave it anywhere where cleaver little paws can get to it (like on the holder or on the counter, or on the window sill),  it will be thrown onto the floor and bitten and clawed.  When you get home there will be toilet paper everywhere and the roll will have little vampire marks all over it.  Same thing with tissues if they are sticking out of the box.  He will pull them out and throw them around and attack.

12.  I have given up trying to keep Bitey from jumping on top of the dining room table. He uses it as a staging area to attack things and as a means of running, jumping and jungle-gyming all over the place.  He will climb up and then jump down, body slamming a toy.  He will also spend time knocking everything off the table, like phones and anything else we happen to put there.

Yup, pretty much.  That poor bastard.

13.  We can’t allow Bitey into our room at night because restful sleep time is not recognized by cats as a necessity.  He will attack and bite our phone cords and did destroy my husbands tablet charger with his sharp little teeth.  He will play with anything on the floor, batting it around, making all kinds of noise.  He will attack feet, hands or anything else under the covers.  He will run across our faces and/or attack our faces.  He will purr loudly (his engine is busted or somehow needs a tune up because his idle sounds all crazy).  Then he’ll circle and knead and then get up and circle and then knead, circle and knead.  Circle and knead. CIRCLE AND KNEAD AND PURR!!! He will stick his face right next to your face so his antenna (otherwise known of as whiskers) will tickle the hell out of you while you are trying to SLEEP!!

15.  Picking on the couch is a past time.  He indulges simply because he wants something.  He’ll pick, pick, pick, we’ll say “NO!” and then he’ll run to another part of the couch and do it again and we’ll say “No!” again.  This will continue until he gets whatever it is he wants.  I absolutely loath giving in to demands that are forced with threats.

16. He expects that I will clean his poop in his litre box.  When I do, he gets excited and wants to annoy  me while I do so by attacking the handle of the box containing clean litter.  As soon as I clean his box, he will immediately soil it.

17.  Anything that falls from the counter in the kitchen is a toy.  Lettuce is a particular favorite to bat, play and bite at it until there are little pieces of lettuce debris all over the floor.

18.  Anything on the bathroom counter is a toy.  He will bat off things like razors or any device or charger.  For example, my husband has a beard trimmer dealy and Bitey thought it would be fun to bat it off the counter with a crash and then when it broke into two pieces, he batted one of them under the sink.  He has also batted other items under the sink.  Hair ties, contact lens cases, toilet paper rolls (the cardboard part), etc.

19.  The shower is particularly fun. Attacking the curtain while the water runs against it is a hoot, sticking head in at either end to let in the cold air is annoying.  Lowering cat body in between the tub wall and the shower curtain and hanging out, keeps them guessing.

20.  Strings of any kind drive Bitey mad.  (those goddamned strings!!)  Strings on bathrobes that are hung up are fun to jump and attack.  Strings on sweatshirts, shoes, pants, bra straps etc are all toys.

21.  Tape is fun to bite when it’s on a box.  It also sounds really really annoying.

22.  Packaging of any kind, like long sheets of brown paper are really fun.  Running at full speed and diving into said paper is AWESOME.  And also really annoying.

23.  If glasses (spectacles) are spotted off any surface, like a bedside table, window sill, etc, they are fun to push off. (Luckily, so far my face is mostly safe, but he has clawed my cheek before.  By dashing full speed at my face.)

24.  Computers are for walking on, laying on, or running across at full speed.  If strange web pages are accessed or wrong emails sent, this is a bonus.

25.  Grocery day is exciting because both paper bags and reusable bags are really fun to jump inside.  Especially the reusable ones because they have handles for attacking.  Crushing paperbags with cat body is also fun.

26.  Trying to trip us is a hazard he has mastered.  Running in between our feet as we go upstairs or are carrying things is particularly enjoyable cat past time.

I will conclude by telling you that Bitey seems to be a devil sent to torture me.  Occasionally he deems me worthy of affection.  Although it’s not even that I am “worthy”  it’s more like, he wants affection and he “settles” for letting me be the one to give it to him.  And then everything is like peaches and cream yogurt, just great and sweet and loving.  Until the claws and teeth come out again.  The reprieve I feel is incredibly short-lived.  Why does he hate me when I’ve loved him so well?  When I take care of all his needs?  WHY OH WHY!!??  I lament!!

Haha…just kidding, he’s a punk.  We totally have a antagonistic relationship.  And FYI, he loves giving us shit ALL the time, but you give him just a bit of shit and he HATES it!!  He’s basically decided this is a one way street we live on where I do all the giving and he does all the taking and all the annoying.  You know what this is?  Whoa.  It’s payback for torturing my brother for all those years.  Yup, I totally just figured it out.  It’s Karma baby.

Fine, this was all just an excuse to insert as many Cat Memes as possible.  You got me.