I don’t know why, but when I’m driving is when I seem to find things annoying and ridiculous and stupid.  In particular, driving makes me hate humanity.  That’s normal, right?

Here’s a list of things that I think are stupid (mostly because it makes me have anxiety about my MPG.  Seriously I have anxiety/irritation about this. I’m an environmentalist) 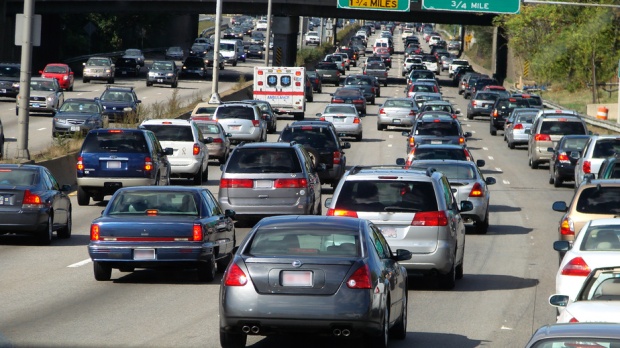 Well, this is exactly what I want to be doing after work. I’m gonna settle in for the long haul. FUN!!

Have you ever noticed how stupid traffic lights are?  And yet, they still keep installing them all over the place even though it’s pretty widely known that they are stupid.  For example:  They (the evil empire) just put another one on this road where the speed limit is 50 MPH.  So it’s pretty awesome to hit several lights in a row and then get your hunk of steel up to speed again, only to be stopped at another light (especially annoying if you drive a semi truck.  I don’t).

Sometimes there’s no one there, so the light is just changing for the hell of it.  Other times it’s for one lousy asshole and to cater to this asshole we have to stop 15 cars in their tracks and thus destroy their MPG’s. It’s really stupid.  Especially since traffic circles seem like a much better way of handling traffic problems.  But no, no, we must have another light.  And it takes them a while to erect these things, so you would think someone would be like…this is dumb.  Why are we putting in this stupid traffic light that will destroy everyone’s ability to have sterling MPG’s?  That is a question that never gets asked.  Bureaucracy at its finest!

Also if you think about it, your worst MPG’s are when you’re starting out.   Your car has to get up to speed from a dead stop and that takes energy.  Thus coming to a complete stop on a 55 MPH road is pretty bogus.  At least with a traffic circle, most of the time you keep rolling and don’t come to a complete stop and it saves time for everyone involved.  No one is just sitting there waiting.  Unless it’s a stupidly small traffic circle.

Buses that Pick up Children on 55 MPH Roads are ridiculous:

This is so stupid, I just can’t even comprehend.  Ok, back in the old days when I was a kid we actually had to TRAVEL to our bus stop.  Our first one, in elementary school was about a mile away and the one for high school was 3 miles away from my house and yes sometimes I did have to walk at least a portion until someone picked me up.  Now, every kid gets picked up outside his/her house and STILL their parents cart them down the driveway in the car.  WHAT?

And it doesn’t matter what road these kids live on.  If they live on a 55 MPH highway-ish road it doesn’t matter.  Still the bus will stop and the flashing lights will make everyone in both lanes come to a screeching halt.  And not just once, but SEVERAL times on this road, at each individual house.

I have a genius idea: Hey school systems, let’s just go directly to Antarctica and melt some ice caps!  YEA!!  Also this can’t really be very safe for the kids.  Why don’t they choose a location not on a busy highway and pick all the kids up in the vicinity?  No?  Too dangerous?

People who refuse to hug the line when turning are idiots:

These people just enrage me so much.  When turning in a busy road, instead of hugging the center line so they can allow others to pass around them, they sit there in the middle and hog the road and cause all of traffic to come to a screeching halt, AGAIN after we just stopped to let those kids get on the bus and stopped at 10 different lights within a mile.  Why?  Why?  PULL OVER!!  Be considerate!!!

GET THE FUCK OUT OF MY WAY ASSHOLES!! MWAHAHAHA!!!

Driving in General is Lame:

Driving in general sucks because I don’t really understand how you can be hyper-vigilant the entire time you are on the road?  How is it humanely possible to be 100% perfect all the time while driving?  Plus if anything bad happens, like a runner getting hit while running at night in the pitch black, or someone walking on the side of a road with absolutely no shoulder, the driver is at fault for negligence.  It’s like we expect that humanity is perfect.  We do, we expect it.  We refuse to accept that accidents happen or that we’re human and thus it is IMPOSSIBLE for us to be perfect all the time.  Plus the stupidity of the person on the side of the road is really not considered at all.

Where I work there are people on the roads constantly, riding bikes, walking, skateboarding, doing stupid shit and yet I am the one that has to be super vigilant.  Therefore Peds (Pedestrians) are/should be responsible for themselves.  Don’t do stupid shit around the road!  Don’t misread me here, I am not advocating people hitting people or not being vigilant while driving or texting and driving etc, however I am amazed by how blame is placed whenever there is an accident.  It’s like we don’t accept accidents on the road.  We don’t accept that they happen.  Someone must be punished for what happened.  In general our society is very into blaming someone for everything that happens.  There is no such thing as misfortune.  It’s always someone’s fault and thus we must sue them.

People that ride on your ass are jerks:

Why do people do this?  For some people this is just their normal mode of operation and not even their way of being an asshole.  This is annoying.  Everyone should be vigilant (haha…YOU MUST BE PERFECT!) about not riding on people’s asses because this causes accidents.  If you don’t have time to stop, you will not stop and an accident will occur.  It’s simple physics.  If I understood physics.  So just be aware. Give people space.  Don’t ride on their bumper.  If you do, I will get pissed.

Also I can’t fail to mention all the other obnoxious drivers: i.e. those that drive too slow/under the speed limit.  Those that zoom past you in a merging area when clearly you had the right of way.  People that cut you off.  People that turn really really slowly and won’t get the F out of your way. Etc.  I could go on.

I don’t typically use drive-thrus ever, but this one time I did and I got really pissed.  I wanted to get some delicious coffee at an Aroma Joe’s on the way to work.  Typically this place didn’t seem to have a line like all the other Dunkin’ Donuts etc that I pass on the way to work.  So I thought I’d stop.  However once there, there were about 10 cars in line around the building.  Yea!  So I sat there waiting along with 10 other assholes and it took forever.  For me, forever is about 15 minutes.  But that’s 15 minutes too long.

Plus imagine all the idling going on!  THE ENGINES were wasting gas!!  All of them!  While we waited in line! At least actual lines of people aren’t using fossil fuels, but this line was consuming the fossils that have been squished into fuels.  It’s ridic.  Technically we could have all pulled into a parking spot and walked up cause this Aroma Joe’s had a window you could walk up to.  But no, we all sat in our cars, idling away the time whilst wasting the costly gaso-lina.  If that’s not stupid and wasteful, I don’t know what is.  However, as you know, humanity deserves to do whatever the hell we want.  That’s how special we are.  And those fossils didn’t die in vain. We can’t allow that to happen, afterall.  We must burn them.  It’s their funereal rites. or Rights.  We must respect their rights.

I did really think about parking and getting out of the car, but then I thought…no!  The line is going to hurry up in like 5 seconds.  I know it.  Basically I’m pretty guilty here.  But I’m lying to myself because I can’t bear it.

In closing, Driving makes me angry and vengeful toward humanity.  Plus I have a 45 minute commute, so it doesn’t help that I spend 1.5 hours on the road, 5 days per week.  I don’t really have a rage problem though, I swear.  I just tend to describe mild to medium irritation as rage, anger and hatred.  And…I just REALLY REALLY love getting good sterling sparkling MPG’s. Is that wrong? To try not to waste the costly fossils that have been sacrificed for us? I don’t think it is.