Wishing all of you Americans out there a happy ThanksG! And to celebrate I’m going to tell you about Cats and Fall foliage. Seems legit, right? Here we go…

The other day Bitey and I went for a walk in the woods. That’s one thing that’s really cool about ole Bitey is that he’ll actually walk with you in the woods or shall I say scamper and race like a madman. I once tried to get the Gentleman to come into the woods and he was terrified (as gentleman often are) of the dangers of the woods. He was walking very slowly, taking his sweet time to check that nothing bad was going to happen to him and he was meowing constantly as if he faced imminent death. Mr. VS was with me and wanted the Gentleman to either “Hush up, young’un” or “Pipe down Choir Boy!” or “Shut up!!” The Gentleman is clearly used to the city life and is too high class for the woods. Bitey, on the other hand, enjoys nature to a high degree and romps and plays throughout the forest (and then comes back covered in ticks. *shudder*).

BTW, an update on the relations between Bitey and the Gentleman: They tolerate each other but are still not friends. Bitey, I think is slightly dense because he doesn’t get the concept of “play” between cats.  Although I can’t really blame him since he grew up until 7 months of age in a cat free environment surrounded by myself and Mr. VS. Still, when is he going to learn? How could he be too “set in his ways” at the age of 7 months?  Too many questions, not enough answers.

The kittens have been introduced to the basement. Their litter boxes used to be upstairs but Mr. VS and I had had enough of that bullshiz, so we moved them to the basement after Mr. VS installed a handy-dandy cat door made for “husky” cats.  (Why am I “into” quotes right now? Also our cats aren’t really “husky” but the other smaller door looked ridic small and I doubted they would want to use it). The problem with this basement arrangement is that our basement is filled with construction sawdust, like a swimming pool and the cats inevitably come back upstairs covered in it and then they track it around the house and leave piles of it wherever they decide to lay down.  Like the couch.  And thus my domestic duties involving cats have become even more tedious and Mr. VS’s grumblings have known no boundaries. Although I make claim that it’s “his” sawdust.

So as of now, the kittens will sometimes touch noses and sniff each other. However the Gentleman has still been feeling spastic and attacky at times, particularly when he’s high on nip and then he straight up lays siege to Bitey. Thus, I have learned the following: Bitey the woods cat is badass in regards to the out of doors, however is afraid of other cats and does not understand “play.” Also the Gentleman is terrified of the outdoors and the woods but yet is not terrified of fluffy bitey-cat Bitey.  I don’t get it.

Here’s my little friend Bitey chillaxin like a cat gangsta surveying his territory on a stone wall that surrounds a graveyard on our property.  Bitey was digging the stone wall because there were chipmunks living in it and he was getting his hunt on.  Also note the one random white whisker that Bitey sports.  He’s pretty dope, eh?

Here’s me being obsessive about taking photos of fall foliage. I freaking love fall foliage photos. I will take 1 million pics and fill up all the memory on my phone if I am given the opportunity. It gets out of hand. So that’s basically what our walk in the woods turned into.  Me taking one hundred million photos of leaves and shit and Bitey romping around in the leaves trying to kill things and looking super cute and dastardly, yet un-pet-able.

This is Bitey after he was done trying to catch chipmunks. Look at his fluffy tail. He’s pretty good looking and tricks you into thinking he’d be good to pet and if you can do it, he is. He’s super soft. Alas, most petting encounters lead only to instant biting, unless of course it’s his idea and then he’s a whore for love. Although while in the woods he did rub on my leg a few times and he thought it was fun to walk slowly, let me get ahead and then race by me as fast as he could go like a batshit insane animal with his tail held sideways. He’s ridic.

As his internet AKA name suggests, Bitey loves biting so much that if your hand is near he will pull it in with his paws to his mouth so that he can take a bite. He also jumps up  at me and gets excited and claws my leg sometimes too. Clearly, this is adorbs behavior and I love cats.

Below you will find a gratuitous photo of the Gentleman, lounging indoors where it is safe in the sunshine. Super extra lazy. If I could achieve this level of lazy in my day to day life, I will have won.  Cats have somehow scored the good life.  I don’t know how they did it. If I was cuter and fluffier maybe some larger species would adopt me and let me lay in the sun all day long and then feed me and take care of my poop. And if I was really lucky, I’d work it out so I could bite the hand that feeds me (and cleans my poop) and somehow still be a loved member of the family. Damn. 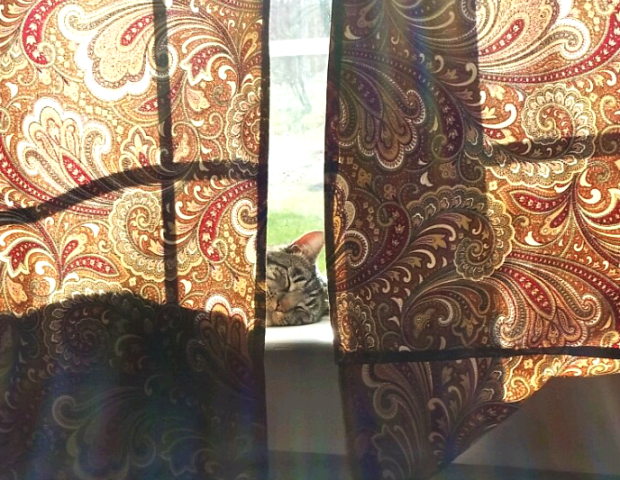 Finally, this is a photo in tribute to Mr. VS because it’s one of his rusting hulks of metal that he refuses to send to the crusher.  He makes us look like terrible backwoods hicks. However, when I saw this beautiful photo I had taken, I was slightly mollified over his hoarding problem. But I got over it pretty quick and started telling him to send that POS to the crusher so we could get some metal money.  Mr. VS has made claims in the past about finding a long line up of junk cars “beautiful.” What the hell is wrong with him? 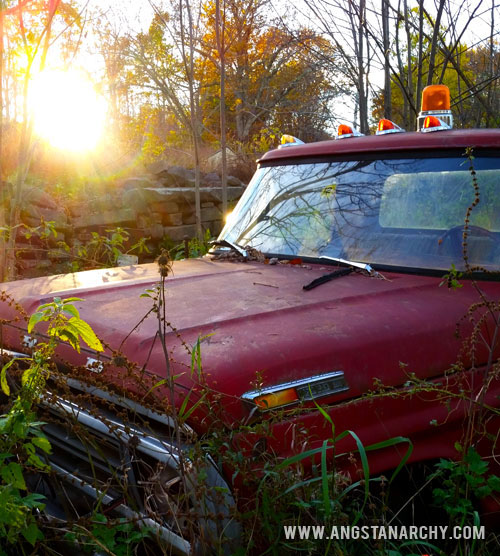 And thus, I give you, a walk in the woods with Bitey. Clearly, my Crazy Cat Woman Crown and certificate of fall foliage photo excellence is in the mail. Plus I will soon receive a tolerant-yet-long-suffering-wife award due to Mr. VS’s views on junk and sawdust.