The other day I was annoying Mr. VS as I typically do on a DAILY/HOURLY/MINUTE (ly ?) basis and it occurred to me that I need some kind of statistics to tell me if my annoyance campaigns are actually working.  Like…am I properly annoying Mr. VS or are my tactics all wrong?  It’s like how when you run an ad campaign for business you look at all your “analytics” so you can tell what’s working and what sucks.  I need this for my annoyance techniques.  I have been honing them my whole life, but what if I’m off base and not on-trend?  It’s like this blog, I have to look at those old analytics now and then to see what the hell I’m doing.  Not much as it happens. Ha.

This revelation came to me as we were driving home from dinner out and I was slightly under the influence of the glorious inebriation juice.  It so happens that when we’re in the car, my mouth is just basically moving, saying shit for no real purpose because otherwise it’s just music and silence and an occasional comment by Mr. VS.  We cannot have that!  It’s too quiet! Plus, you know me, talking is like a compulsion. It has been since I was a baby. It’s genetics ya’ll.

And so, there I am just filling up the silence with randomness or else just repeating the same kinds of boring things over and over again.  So really, my game was lacking in the annoyance arena, as far as technical expertise.  Mr. VS was EASILY ignoring me.  He’s had lots of practice in that, so he’s pretty good at just sitting there silently driving, looking at the road (as if you really NEED to be looking at the road while driving!) while I just go on and on about whatever.  I KNOW he’s not listening.  How rude, right? If I’m putting in an effort to create a pretty full bodied annoyance campaign, he really ought to respond! He’s a bad consumer of my annoyingness.

So I’m sitting there, realizing that I was being exceptionally annoying (not cleverly so, just basically a low grade yip/yap annoyance like a dog barking in the background) and I know that anyone else would have been fed up by that point and been like…SHUT UP!!! I WILL PULL THIS CAR OVER!! But Mr. VS was just calmly going about his driving.  Sooo not fair. Although, I’ll admit I was being a bit lazy with my annoying.  I wasn’t really trying hard enough.  You really can’t get lazy with this stuff or else your customers will close down and not respond to anything you do.  You can’t have that!

So I was thinking…where the hell can I get a nice little print out that tells me how my annoyances are working.  Like…it’ll list all the ways I try to annoy Mr. VS and then it’ll give stats on how well each technique is working.  Clearly, jabbering in the car is FAILING and I need to go back to the creative drawing board on that one.  However, there are other techniques that work a bit better.

The shitty thing is that Mr. VS has learned all my techniques and practices them on ME as well.  He’s learned my TRADE secrets! You can’t let your consumers use your tactics against you!!  For example:  If I dance around the house in an annoying manner to try to get on his nerves, he’ll then do the same to me while I’m trying to do stuff!  Like, I’ll be right in the middle of really getting some good work accomplished on reading a novel and he’ll be dancing a jig around the house like a lunatic fool.  Or else if we have ice cream on a Popsicle stick, he’ll keep that thing in his mouth and waggle it around, just to try to annoy me!

The only REAL way to annoy someone fully is with body contact.  You’ve got to get in there with the tickling, the poking at them, kissing, etc.  It’s really the best way because you’ve invaded their personal space.  People don’t like that too much, especially when the touch is “The bad touch” as Mr. VS describes my wild hyperactive annoying touches.  He can tell when I’m filled with useless energy that I am expending upon his person.  (HAHAHA.  Sorry.) And then he gets annoyed, especially if he’s trying to accomplish good work by looking at various questionable and/or boy-like websites on the interwebs or when he’s actually trying to accomplish real work, like fixing things.

Poor Mr. VS, I am a MASTER at physical annoying.  I’ve been doing it for 30 years!  Yes, that’s the age of my poor long suffering little brother! It’s on my resume and I should actually be awarded an honorary degree. 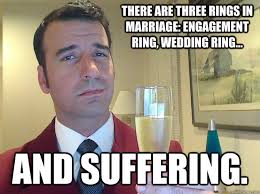 This is Mr. VS’s favorite saying. We’re in the 3rd ring!

The thing is, that Mr. VS has learned how to retaliate and annoy me as well.  He must be privy to some kind of annoyance analytics report on ME! Where is he getting this report!?  I NEED ONE!!  Because Mr. VS has learned to annoy me physically when he’s feeling hyperactive too, like after that second cup of coffee on a Saturday morning.

It’s usually when he’s got all kinds of energy but nothing really good to spend it on (or hasn’t “started” his day yet) and I’m quietly enjoying myself on the couch with some really important world-shattering literature.  So why not spend his energy on annoying me? Afterall, it would be so pleasurable! Right?!  It’s what I would do, so can I really blame him? I pretty much spend any extra energy I have on annoying Mr. VS.  It’s called LOVE people.  And yes, we spend on it. Like the other night when I was giving Mr. VS the old grasshopper treatment with my legs while he was trying to go to sleep.  HAHAHA.  That sounds dirty, but it’s not, it’s just plain annoying.

I shouldn’t really be surprised that Mr. VS has skills, after all he’s had several quality years of instruction on how to annoy people.  Yeah, it might not have been direct classroom instruction, but life experience has to count for something, right? He’s learned from a consummate master.  A expert in the ART of annoying.

I’m realizing that my game is off. I’ve been slacking. I need to turn this franchise around. Guess I gotta make up my own report. But it’ll be WORTH it. I’ll know exactly where to spend my extra energy and which tactics are sure to gain me the results I so desire.  Mr. VS and I will enjoy a happy marriage, am I right?! No marriage is complete without annoying each other on purpose. That’s my deep held belief.