Lately, my short term memory has been failing at life. It’s taken a nice long vacation and has not returned. It’s getting scary you guys. I used to be so on top of things and now I’m a sad shell of the woman I used to be. Guys, thoughts will appear and then they disappear into some unknown abyss, never to be seen or heard from again. These poor thoughts have fallen into some kind of black hole within my head. It’s like my thoughts went hiking and then they fell off the mountain and then they didn’t get stuck in a mountainous pass, cut off their own arm and thus fill my head again with their mutilated but still somewhat coherent presence. No! They fell into the mountainous crevasse and were GONE! FOREVER!! NEVER TO BE THOUGHT OF AGAIN! They were akin to the Sarlacc swallowing Boba Fett! GONE!  AWESOMENESS GONE! <–geek alert–EEK!.

These poor thoughts are, however, mourned with lamentations, tearing of hair and swathes of black cloth.

Another issue has arisen where even Words sometimes fail me. ME! Words should NEVER fail me! I am the royalty of words. I am the PARIS HILTON of words, so this should NEVER happen. Do you like how I chose her? It’s on purpose. Cause you won’t see me saying that I’m the Kate Middleton of Words.  Or the Michele Obama of Words. Nope. I’m more like some cheap reality star. I am the KIM KARDASHIAN of words. I’m a mess, basically, and I use words to my heart’s desire in a rather low demeaning manner, so therefore, I’m like word royalty of a trashier kind. I am NOT the Ernest Hemmingway of Words. I’m the Ernest Hemmingway of alcohol.

Anyway, back to the problem at hand where there’s all this blank space in my mind when I try to think about what was filling that space just moments before. Don’t get OLD you guys!! It’s the worst!  I used to laugh at people who forgot shit! I would chuckle in a mean manner at the old befuddled OLD PEOPLE! That’s because I was so secure in my mind! My  mind used to be so sharp it could remember 10 things at once!  It was like one of those thingy-majigs that people have on their desk that they use to stab and hold notes and papers. My MIND WAS THAT SHARP! You could have KILLED with my mind! My mind was a murder weapon! 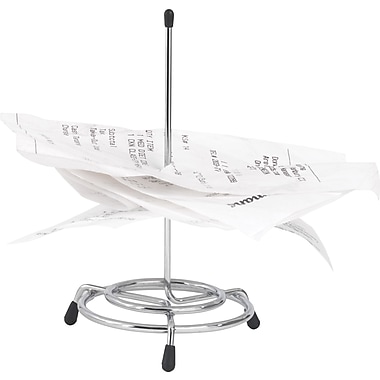 See, I couldn’t even remember what this was called! It’s a spindle! And NO ONE keeps the little soft tip on it! They take it off and then it’s an office weapon! I’ve seen some sharp menacing spindles in my day.

I’m told not to get all worked up because apparently there’s just too much information in this world and how can we possibly keep all this bullshit within our tiny noggins? And there is a lot of bullshit, that’s true. I’m supposed to retain a mountainous mega shit tons of information on useless topics. But I heard these platitudes, aimed to soothe me into a false sense of security, from another old person, much like myself, so really, we’re probably just trying to make ourselves feel better.

I have to give props, cause young people do have pretty astounding brains. They actually remember shit. They can be interrupted 17 times and still remember that they wanted to do a load of whites when they get home from work. They can have 10 things on their to-do list and when they turn to the computer, they will remember why they opened that particular spreadsheet. They’re super humans. Also their skin and bodies look pretty good too. They are BRAND NEW!

Don’t GET OLD YOU GUYS! Things start to break down like some kind of broken-down-used-up-out-of-date-old-fashioned equipment! AND YOU KNOW WHAT THEY DO TO THAT SHIT!?! What happened to the typewriter or that crummy dusty horrid old fax machine in your office?!!! THEY THREW IT AWAY!!! IT was TRASH!! MEANT FOR THE LANDFILL!

Keep in mind that we no longer fix old shit in this world when it breaks down.  So as soon as your brain starts to fail you, you are shit out of luck. It won’t happen for a few years, you’ll feel superior to all the 50+ people in your office. I know, this used to be me. I was so superior, mentally. But…the scariest part is that it doesn’t take until you’re 50 to start to see this happening. Guys, it starts as young as 30!!!!!!!!! You guys only have a few good years left, or maybe none AT ALL!! Maybe I’m preaching to the choir!

This is why I write down EVERYTHING. You’ll learn eventually, you young things, that the mind is filled with holes and thoughts will slip and slide down these holes and never return to you. My mind is a minefield or a golf course filled with gophers. WHERE IS BILL MURRAY? And some of my thoughts that are lost are/were GENIUS. I should have a funeral for these dearly departed thoughts! I may, at the very least, hold a celebration of life for them, because at one point, they were alive and stunning and so filled with gloriousness! THEY DIED TOO YOUNG! Barely out of infancy!!

So please, don’t lose your genius thoughts. Write down EVERYTHING! I need one of those mini tape recorders by me at all times. I need a reality show to follow me around so I can voice all my thoughts and thus have them preserved for all time. Even the dumb ones. Then I’ll never forget to scoop the cat’s litre, or buy coffee at the grocery store.  Guys, I even forgot to buy CHOCOLATE the other day. It’s not even possible!!

DON’T GET OLD!!! Buy into some stay young scheme NOW!!!