When I was a kid I was terrified of aliens. In the fifth grade our teacher showed us all these films about people seeing flying saucers and being abducted (and probed *shudder*) by big headed aliens in remote mountainous regions. (Why 5th grade teacher, WHY?!??)  So, it figures that I was terrified I was gonna to get abducted from my room at night by little green men. I would cower in my bed, just waiting for some kind of alien glow to peek through my blinds. Sleep was lost. Thanks a lot fifth grade! (BTW, be warned that the best thing about this post is the images. I can’t really take credit, but I’ll try. I refuse to take credit for the weird, off topic, rambling text.)

But now, I’ve finally started to *maybe* think that aliens could be pretty cool.  Why the hell do we have to call them that?! It sounds so terrible and reminds me of my nightmares! I’m sure they’d hate it. They’d be like..ONLY we can call ourselves aliens. You guys are shit out of luck. Or they’d be like…let’s be all inclusive with our labeling earthlings, haven’t you learned that yet? Pre-school curriculum? No?!  For shame!

AHAHA!!! So geeky, so awesome!

I’m really kind of obsessed with space and space exploration. I find it fascinating that we’re looking for habitable worlds and alien life. It’s slightly terrifying too. But mostly I’m trying to have a positive attitude because guys, it could be SO COOL!!  There’s probably all kinds of weird shit out there to discover! (Let’s boldly go where no one has been before! Not even Captan Picard or Kirk! And Kirk, as we know, did a lot of alien probing.)

And these thoughts are like a revelation for me because seriously, I’ve spent my adult life doubting that there’s life anywhere else because I was so scared by my elementary school experience with horrifyingly scary aliens. I didn’t WANT there to be life out there because Independence Day and Alien taught me it would be bad news bears. But now, as an adult, I’m like…WHOA SHIT!! The universe is hella huge, there are solar systems, galaxies etc every-fucking-where! So clearly, the odds are that there’s life out there, somewhere. There HAS TO BE!!

Like imagine the freakish shit that lives on our own planet, aliens would be that same weird shit but somewhere else! On some other planet with weird ass plants and weird animals and strange atmospheres and oceans and gravities! It wouldn’t even necessarily be scary, it would be interesting! (I’m not just trying to convince you, I’m trying to convince me) Unless of course they straight up wanted to murder us, but hey we’ve already got species, including our own, that want to murder us here. Same murderous shit, different solar system. Besides, aren’t we keen to find another earth to inhabit once we’ve decimated this one??

I wonder: would there be what we would egotistically call “higher life forms” such as ourselves on these other planets? Do you think they would be like us? Do you think they’d be looking for another planet to take over since they had used theirs up?  I feel like that’s where we’re going. It’s in our nature to be this way. We get too excited, use shit up, swarm, hoarde, consume and then we’re like…oh…oppsie! Clumsy us! We were going along our merry way when we tripped and accidentally spilled radioactive ooze all over our planet and now we need a new planet! Just like that time I broke my iPhone screen!  OPPS!!  (Guys, we’re exactly like the clumsy and not too bright but cute and adorbs protagonist in your favorite YA novel. I’m looking at you Bella!) So then we’re like…um…like, aliens, we’re totes gonna need a new planet for like…survival and shit. Can you hook us up with one of your extra worlds? We’re just so clumsy and cute!  We can’t help ourselves!

Seriously, after re-reading that paragraph I’m imagining us getting so excited about every goddamned thing that we piss our own pants, collectively of course and then we need a new planet AKA diaper. Stay classy earth!

Guys, is this kind of careless klutzy behavior universal to living things with big brains? Let’s hope we’re not the only ones or we’ll be shunned in the universe as big losers until we clean up our act.

Speaking of universal or at least earth rules, there are typically checks and balances (thank you judicial system) so that one species doesn’t use up all the resources (like when deer or mice populations explode, we’re like, we’ll take care of that!) However humanity has somehow rearranged the natural order of things with our huge juicy (you’re lucky I didn’t use the M word. ) brains. So we’re outside this normal pattern. What about other planets? Same shit? Are there smart yet destructive life forms there too? Do they have the same things we have? Love, music, art, emotions, appreciation of beauty etc? Are these things also universal? I hear we’re finding that water is universal. What else is universal??

There’re probably planets teaming with freakish and glorious life all over creation (ha) but we don’t know it!  They aren’t little green men! They’re like the sea creatures we’ve got that are weird as hell! For some reason I thought saying that would make you (me) less afraid, but have you seen some of that weird deep sea stuff? It’s terrifying! Imagine a 10 year old me being afraid of that shit coming into my room at night to A. Molest the shit out of me or to B. Enact a sweet abduct/probe combo meal. No thank you! (Secretly, I’m thinking that stuff in our oceans is already alien. How do we actually know that stuff emerged from our own planet? It’s totes some alien life forms living it up in OUR oceans! LOOK AT IT!!! THE HORROR!!!)

Guys, these  alternate world life forms in other solar systems are probably looking around thinking…is there life out there? It’s basically like the universe is a jail and we’re in one solitary cell. So we can kind of detect that there are others in solitary confinement around us, but we can’t get to them. And you know what goes down in prison. Yeah…that. Wait…what?

That’s the shittiest thing about space is that it’s SO FREAKING HUGE!!  I try not to think about it cause I start feeling weird and insignificant, like I’m this teeny tiny life form in this ginormous massive universe. What it means, in terms of travel (you know, so we can vacation in sunny Alpha Centauri) is that we really can’t get there, at least not now (sorry, no road trip! Unless you want your great x 10000 grandkids to enjoy the sunny beaches of Alpha Centauri for you) (That number wasn’t scientific).

So if we want to be colonizing some new earth anytime soon, we’re gonna need to get some updated hella sweet technology and we’ll need to extend our life expectancy, a lot. It’s gonna take generations to get to even the closest solar system! Damn you speed of light! Always ruining my vacation plans!

Also check out this guy, he’s like the rock star of space sciencey types.

I don’t get it, but I like it. AHH VOYAGER BE CAREFUL!!  The cuteness levels of the heliopaws and voyager is too much. JUST LOOK AT IT!! 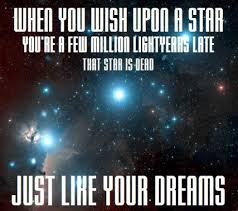 5 Comments on Aliens: Not as Scary